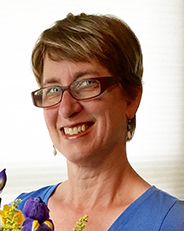 The great joy of painting for me is that it provides an opportunity to sit with and really see the world. I work both in plein air, and in the studio from sketches, color notes and photos that I have gathered as reference on site.

All of my work is essentially about light, the way it falls on the landscape. I love the light in the warm summer months, especially in the morning and the evening, when the sun is low in the sky. Shadows deepen, and colors seem especially vivid in the slanting light. In the winter, the light is cooler, and the colors more muted. However, it is often clearer, and there is a beautiful stillness and clarity in the landscape. I am particularly intrigued with water, how it reflects the sky, but also is transparent, with the objects below and above the surface combining in an ever-changing mosaic.

I am honored to be profiled in the Nov/Dec 2018 issue of Pastel Journal, in an article focusing on my Aerial series.

In 2017 my work was featured in Pastel Journal in an article about the IAPS exhibition, and in a South Shore Living article about True Grit Gallery.

Coverage of my shows and awards has appeared in: The Boston Globe, Boston Herald, Worcester Telegram and Gazette, and Milton Times